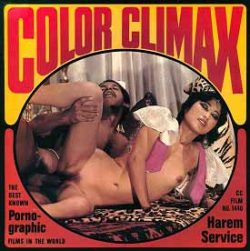 #1440 Harem Service. Two young Arab princes are sent on a special mission by their father, a very rich sheik.

They travel to Europe – Copenhagen to be precise – where they go straight to the CCC, Rodox Trading, to get one of their models to sign a contract, engaging her to become part of their father’s harem for a short time.

The girl accepts and a few hours later, she finds herself in the Orient, where she is immediately “oriented” to sex. A black girt starts dancing in order to set a suggestive tempo, one of the sheik’s sexual servants – a lovely Asiatic lass – wants to amuse herself with the African harem-stave … 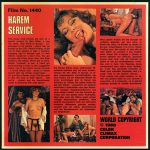