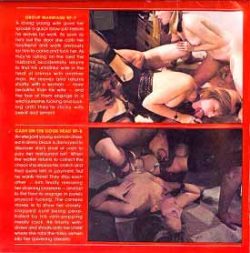 #7 Group Marriage. A loving young wife gives her spouse a quick blow-job before he leaves for work.

As soon as he’s out the door she calls her boyfriend and waits anxiously for him to come and fuck her.

As they’re rolling on the bed the husband accidentally returns to find his unfaithful wife in the heat of climax with another man.

He leaves and returns shortly with a woman – more beautiful than his wife, and the four of them engage in a wild foursome, fucking and sucking until they’re sticky with sweat and semen!.