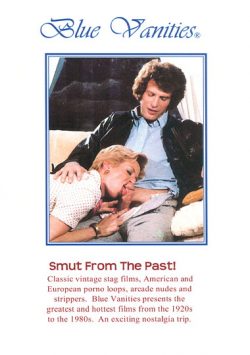 1. AUNT PEG MATCHMAKER, Swedish Erotica #288 (Juliet Anderson, Paul Thomas, David Morris)
“Well Teddy, you finally got around visiting your aunt Peg.” She has someone special for him to meet. Aunt Peg’s friend Peter rings the doorbell and is invited in. Peg takes Teddy to the uppper deck where they look down at gal bathing nude in the hot tub. Teddy gets it on with his new girl as Aunt Peg & Peter fuck upstairs on the living room couch.

2. EIGHT BALL, Swedish Erotica #348 (Debbie Truelove, Ming Jade, Paul Thomas)
The girls get up and look down and wave at the man standing on the pool deck before going downstairs to let him in. Teh three head to the pool room where Ming sets the balls so Paul can break teh balls. He hands the cue to Debbie and then stands behind her to guide her as he lifts up her dress and plays w/ her panties as she makes out while Ming undresses. Paul walks over and opens his fly so she can suck before he lays back over the pool table. They double team him until they lay opposing each other on the pool table, kissing as he jerks off to a facial.

3. JUST BUZZ ME, Swedish Erotica #322 (Seka, David Morris)
Father has sent his newly college graduated son to take over the branch and is met by his secretary Seka. He’s all nervous and she tries to settle him down. He wants to get to know her better and soon is having his first office fuck with her.

4. EARLY DATE, Swedish Erotica #336 (Debbie Truelove, m)
She greets him at the door and takes him to the living room. He sits back in an easy chair covered with a green coverlet and she plops down onto his lap where they make out and he feels her up until she gets u p and goes to stand in front of a white-rock fireplace to strip down and tease him. She soon leans over the arm of his chair to suck his cock before mounting his cock, and laying back over the ottoman so he can eat her before he stands by her face and lets her jerk/suck him to a facial.

5. SENSUOUS SONGBIRD, Swedish Erotica #374 (Connie Peterson, Kitty Shane, Billy Dee)
Billy is checking with the sound man to make sure all the overdubs are complete as they wait for the new girl to arrive. Billy goes out and sets up the sound stage.

7. PERSONAL INVITATION, Swedish Erotica #317 (Laurie Landers, John Holmes)
“Why don’t we swim in my pool? But I didn’t bring my bathing suit . . I just remembered, I forgot to fill the pool.” John’s on the phone with a friend and has to get off because Marlene’s on the way over. He goes out to the deck and sees her pull her car into the driveway, and watches her come up the outside stairs to the loft. They go inside and are soon fucking across a wooden set with faded orange/red cushions.

8. MAKE YOURSELF AT HOME, Swedish Erotica #327 (Simona Wing, David Morris)
David drives up to the house in a red car after seeing a sign that the house is for sale. He asks the owner to show him around. They have some chit chat where she reveals she’s studying to be a figure model, and he’s a photographer in his spare time. She asks him to take some shots for her portofolio but is soon getting fucked on her white living room couch.

9. SERVICE WITH A SMILE, Swedish Erotica #306 (Seka, John Leslie)
Two lovers get together after a long absence. She gives him slow head across a white couch beside a green bubblegum machine before they move out to the white shag carpet beside a porcelain zebra beside them near a granite fireplace and mirrored coffee table with candelabras on it.

11. HOT SALE, Swedish Erotica #343 (Suzanna French, Billy Dee, David Morris)
Jill’s sucking his cock hard and loving it, but he wants to go take a shower. She leans across the bed and calls Jack and invites him over about two to sell her new friend some insurance. Her new bf hangs around and is enjoying a later lunch outside at a small table. Jack arrives and soon the two guys are in bed watching her do a strip tease until she joins them. They double team her and soon have her sandwiched between them. But then Ralph has to run off when he realizes they’re towing his car

12. HOT NEW HIT, Swedish Erotica #370, Big Tits (Desiree Cousteau, Hershel Savage, m)
Pan to Desiree rubbing her tits well as she bathes in a jet black tub upstairs when her butler greets a man at the door. She dresses in her finery and stares down at him from an upstairs landing before coming down the staircase to meet her. He can’t help but notice those great tits staring back at him before she takes him into the next room to sit on a long buff colored couch. The butler grabs his guitar and takes off just as she leans over to suck Herschel’s cock. She gets up and walks over in front of a white brick fireplace to rub her body as she drops her dress before returning to the couch, spoon, mish and then lay back on the floor afghan for a deep mish till he spurts on her face.

15. A MARINE COMES HOME, Swedish Erotica #400 (Loni Sanders, Mike Ranger)
Michael comes home with a friend. Loni & Mike stay in the bedroom as Lisa does a strip dance in front of a rock fireplace while Kevin watches. She shows off her huge tits and then fucks him across the living room couch in front of a metal staircase and coffee table w/ a lg glass snifter.